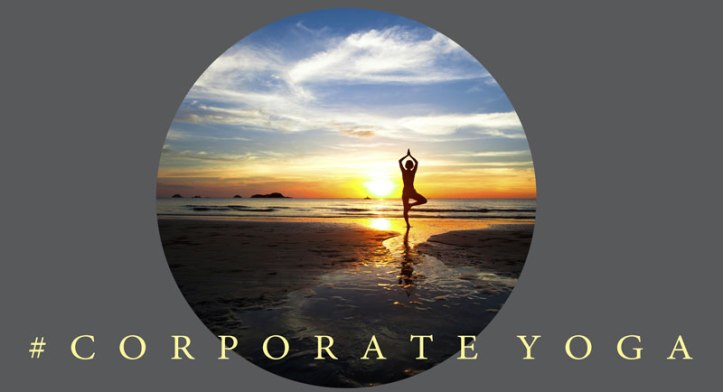 It would be hard to call yoga a current trend. After all, it’s been around since the 5th century, BC. One of the key surviving major texts, The Yoga Sutras of Patanjali, is from the first half of the 1st millennium CE. Hatha Yoga, likely today’s most popular and practiced form, can trace its roots back to 11th century texts. Carl Jung, the notable Swiss psychiatrist (1875 – 1961), was one of the first Westerners to study yoga in depth, and his comments on developing higher consciousness in the East helped introduce the concept to the West. The 1980’s saw an explosion of interest in the subject, and has since grown in popularity to become a 6 billion dollar industry in the U.S. alone. It now includes over 100 different schools, encompassing such varying abstractions as Pet Yoga (Doga), Hot

Yoga, Power Yoga and even, for the especially adventurous, a form of Nude Yoga.

The trend that is emerging, however, is one of Corporate Yoga.

Increasingly, major corporations are looking to this ancient practice to promote workplace health and wellness. There is evidence to suggest that yoga, when practiced at work, relieves physical, emotional and mental tension, and employees experience an increase in their ability to cope with stressful situations, have greater energy and focus, and show a marked boost in enthusiasm for their work. Companies such as Nike, HBO, Forbes, Google, MTV and IBM all support yoga programs, in one form or another. Some even sponsor exclusive yoga-retreats to introduce their employees to the idea.

The Conference Board of Canada have made the assertion that for every $1 invested in workplace wellness programs, an organization can expect $3 in cost savings or benefits. A worthy investment, by any standards.

Beyond the obvious health benefits of improved flexibility, strength and posture, there are many studies to indicate more far-reaching, systemic health advantages. It’s been shown many times to help reduce blood pressure. Yoga has been linked to lower cholesterol and triglyceride levels (the main form of fat in the body). As a treatment for stress and anxiety it has been used for many years.

But research also suggests that yoga can improve social and occupational functioning in patients with schizophrenia. Other studies expound its therapeutic values on such conditions as asthma, diabetes and fibromyalgia. And there is a growing body of anecdotal evidence for its overall improvement on the amorous arts, passionately promoted by a fervent and conspicuous cohort of love gurus.

Whatever the allure – spiritual, corporeal or metaphysical – there is no denying yoga fosters a devoted following. And now that the corporate world has jumped on the bandwagon, the movement has developed some serious capital wherewithal. Brands that want to position themselves as global leaders are eager to associate themselves with yoga, within the ever-increasing significance of their workplace wellness programs. They’re willing to spend the

time and pour in the resources, and that makes it big business.

And that’s a trend that never fades away.

This article first appeared in WELLTH Magazine, a publication produced in partnership by Debco and alphabroder.  To see the entire publication please click on the cover thumbnail. Please note; although many of these products are available in both Canada and the US, all references here are to Canadian products and pricing.  See http://www.debcosolutions.com or http://www.alphabroder.ca for full details.